After living in this world for two decades, I am going to learn skiing for the FIRST time in my life. We wanted to book a ski tour via the internet in Singapore before going to Seoul but we were too busy with our work and other stuff. As I mentioned on Korea Day 3, when we arrived at our first hotel in Seoul - Cats Hotel, there were many brochures on Ski/City tour in the lobby. We took like 5 of them on Ski Tour to compare the deals. Seoul N Tour (http://www.seoulnski.com/) has the best beginner package out of all. At 125,000 won per person, you'll get free pick-up and drop-off at your hotel, a basic trainer, ski gear & gloves rental as well as ski lift ticket for half a day. Climbing up the slope is a chore! Better get a ski lift ticket!

Our hotel staff was so kind to help us in booking the ski tour via phone call on Day 4 morning. We got a morning call at 7.40am to inform us that our tour guide was already waiting for us at the lobby. Our tour guide was a lady, 26 this year, English speaking - she studied in Australia for a year. We were the only passengers on our van, with our tour guide and the driver. The journey from Jongro 3(sam)-ga to Jisan Ski Resort was about 50min. Before we proceed to the Ski Resort, we stopped by a Ski Wear rental shop to get our Ski suits, gloves (included) and goggles. The ski clothes cost 15,000 won and the ski goggles cost 10,000 won. Thus, in total, we spent 150,000 won (roughly SGD 180) on the entire Ski Tour. Skiing is indeed an expensive sport! 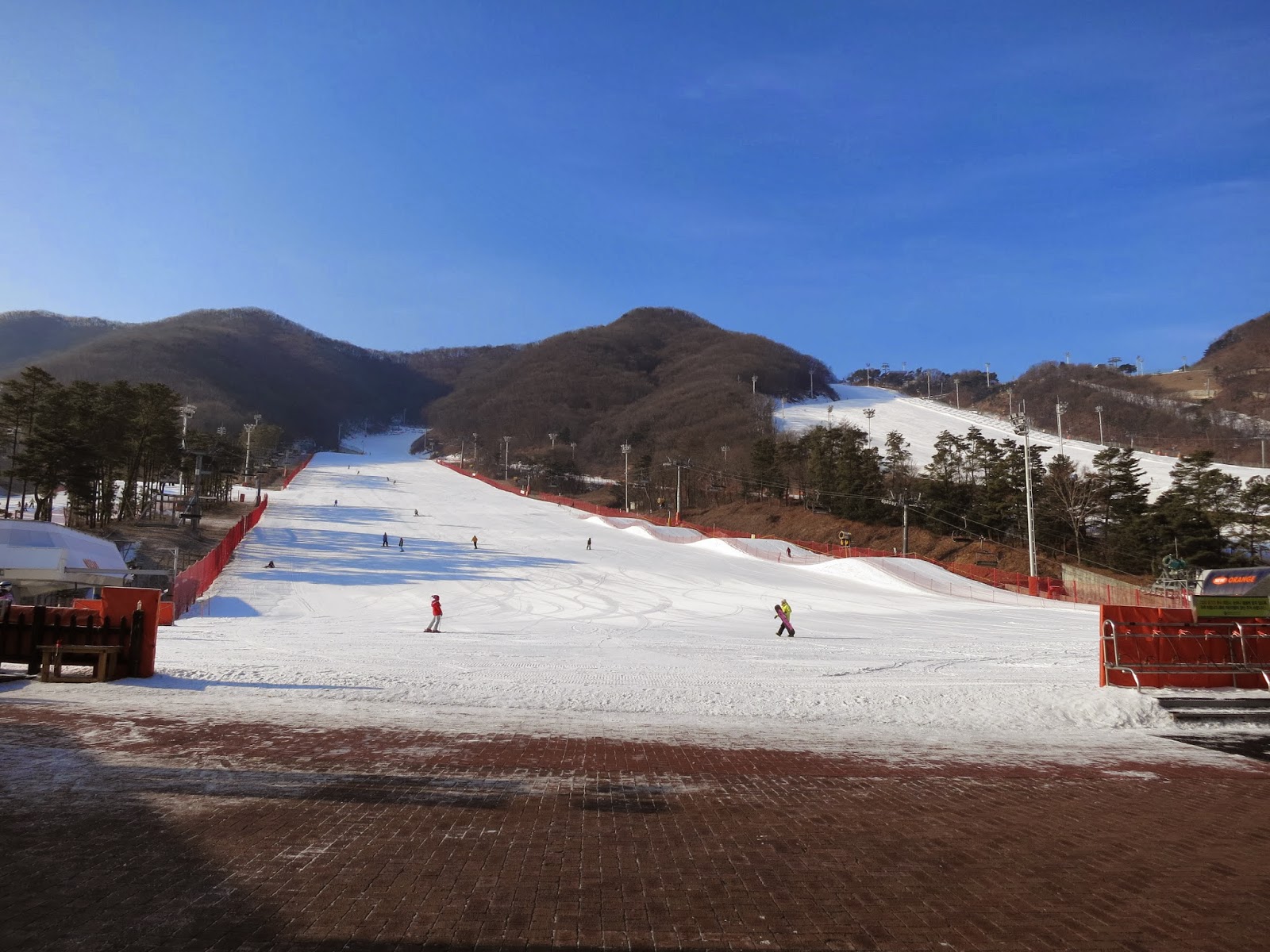 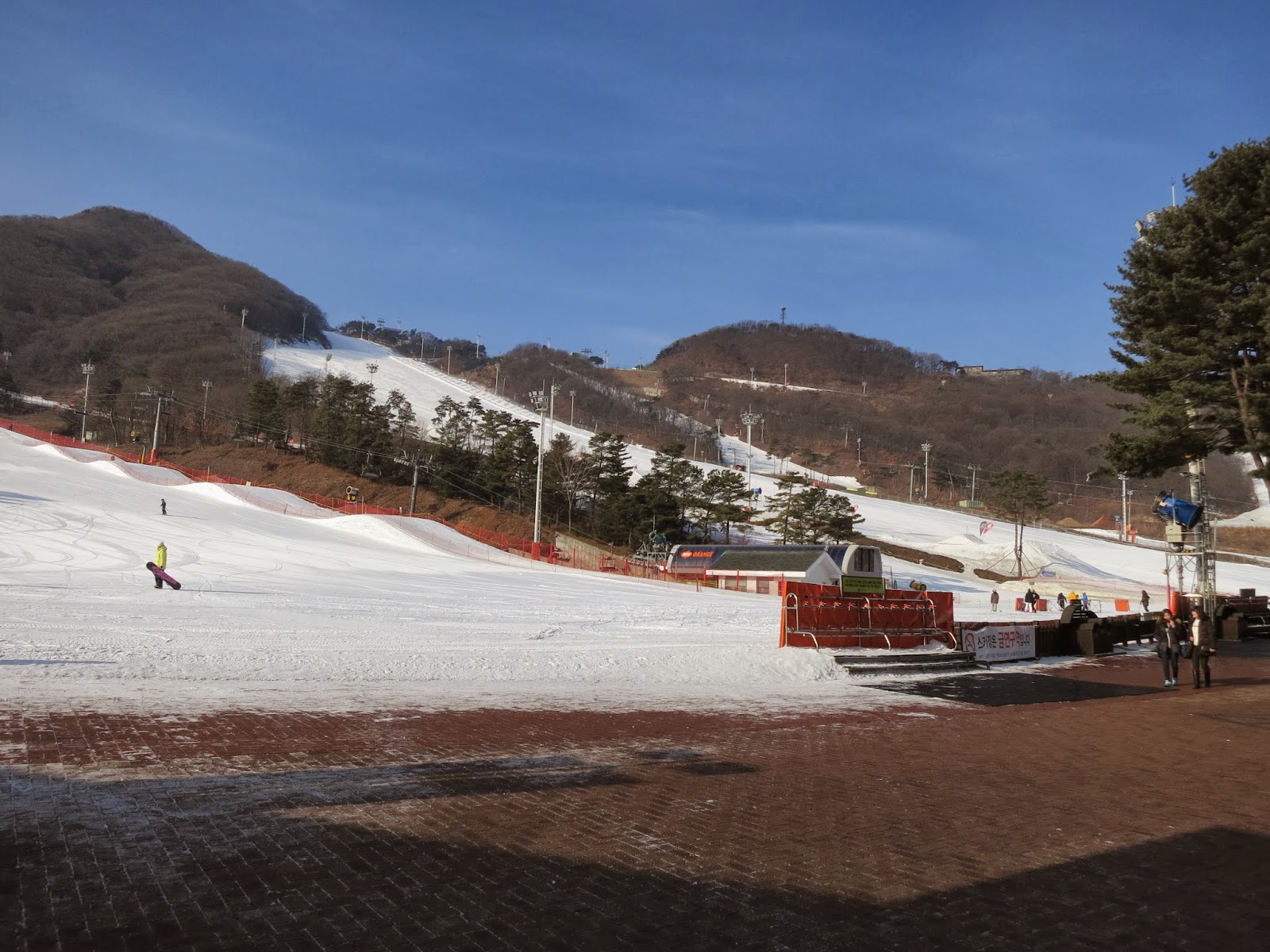 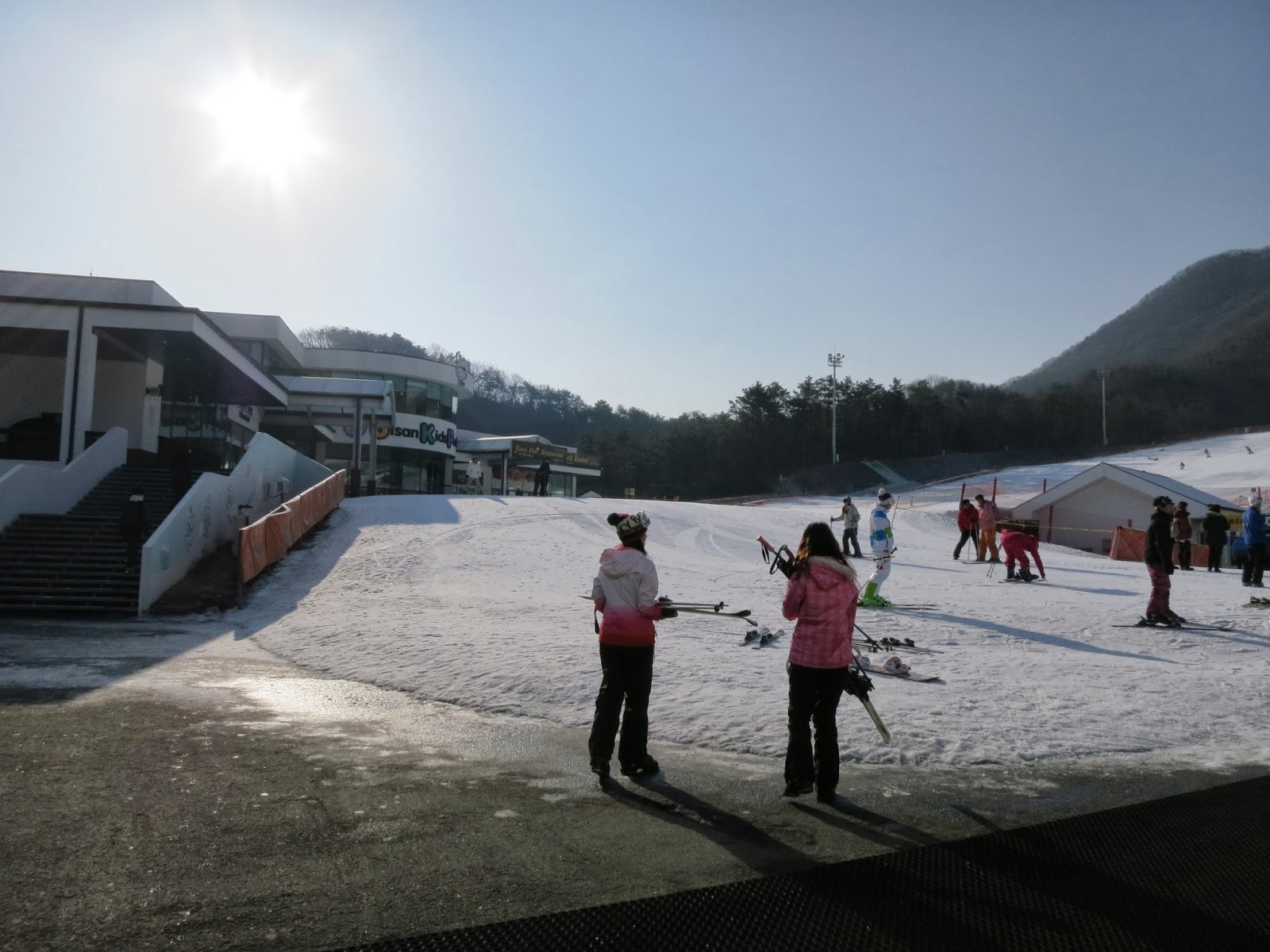 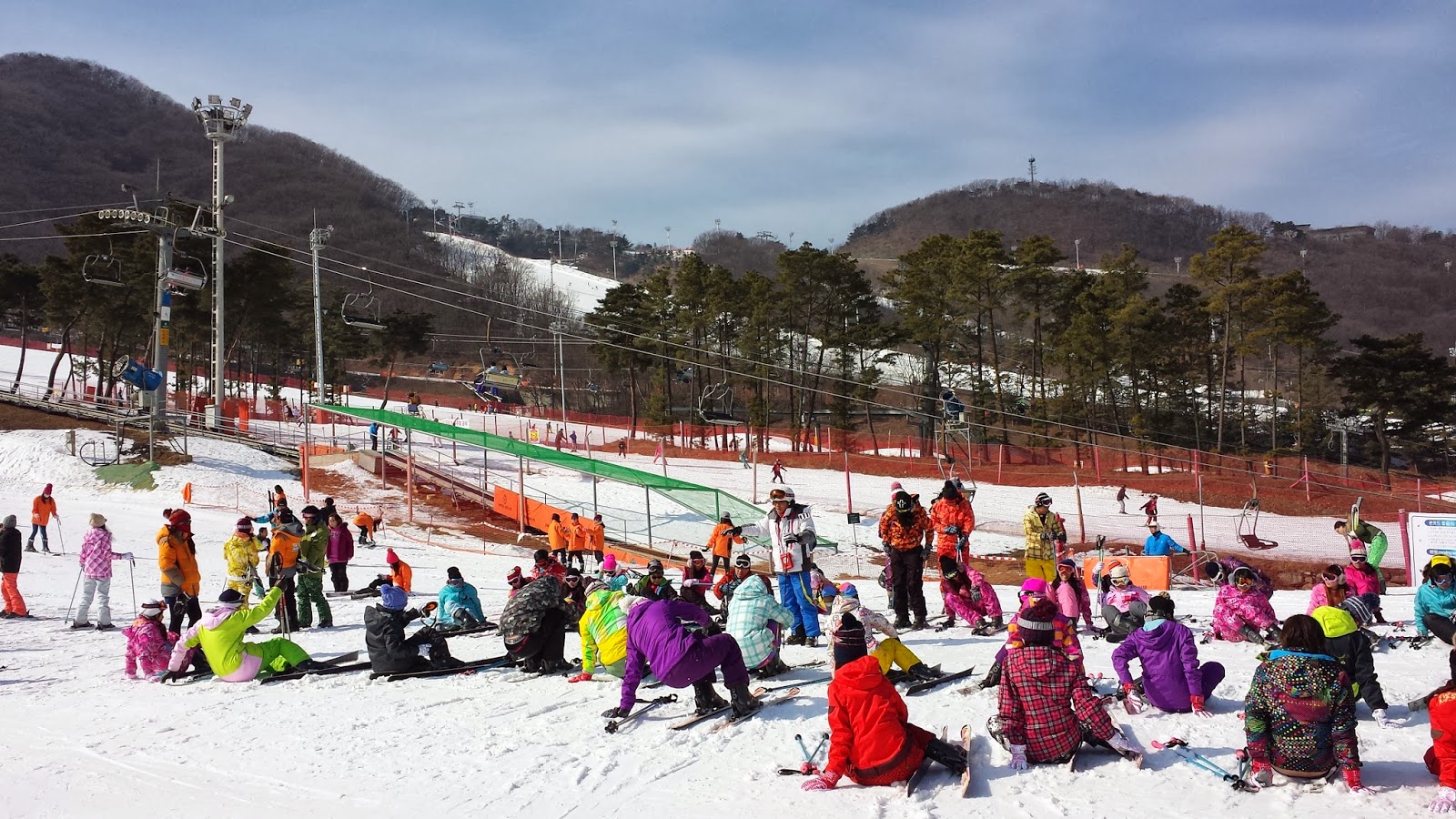 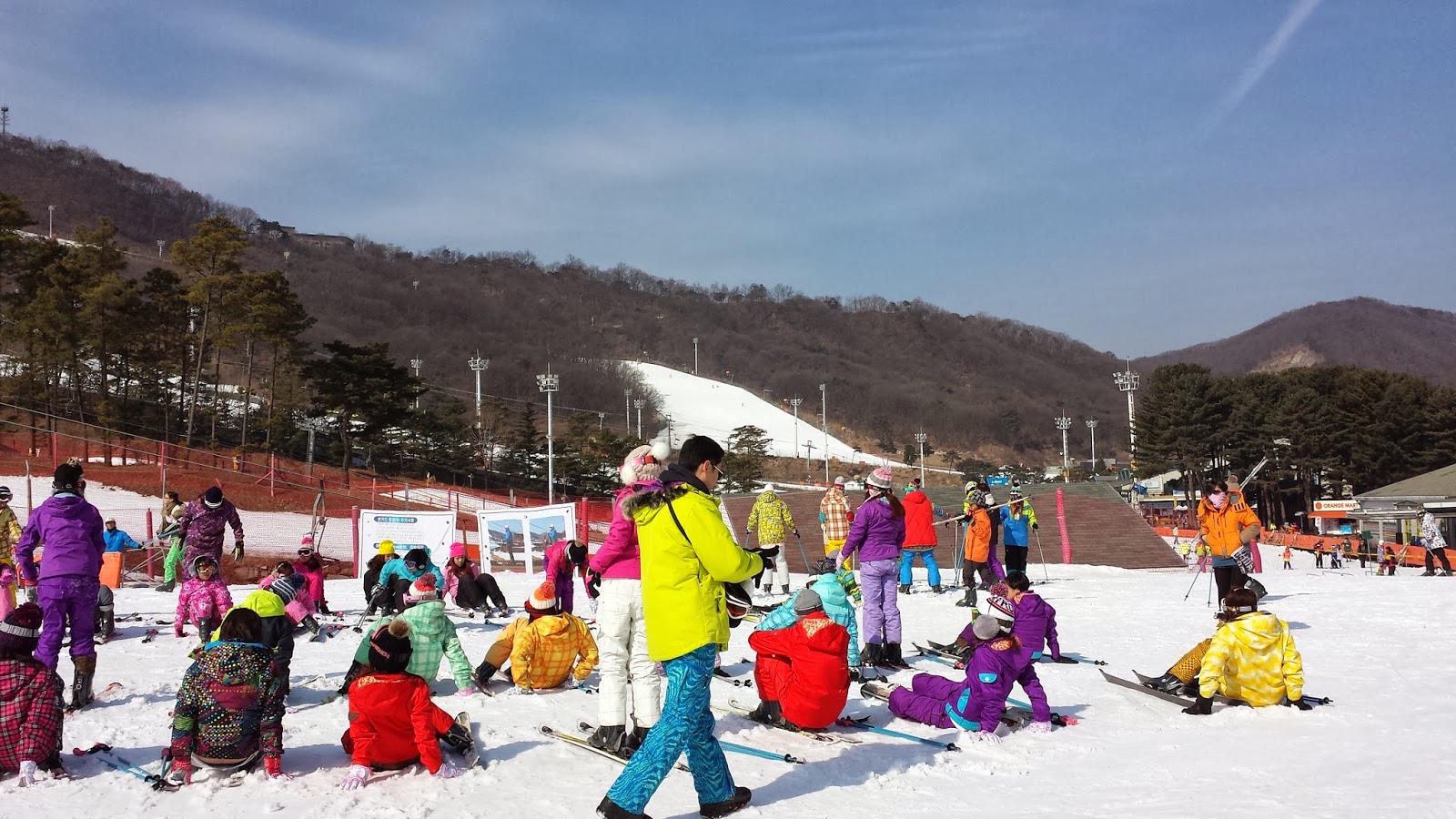 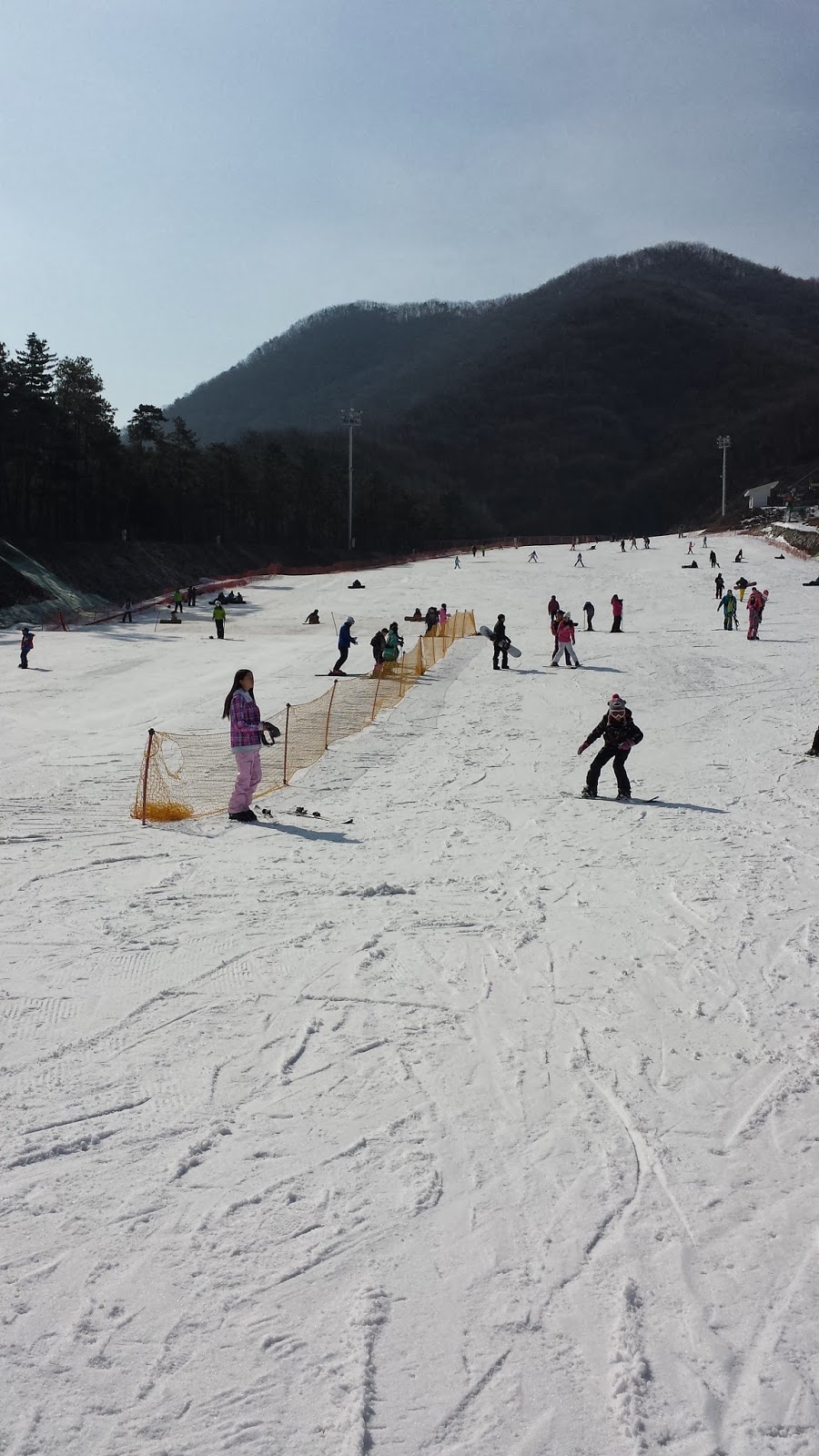 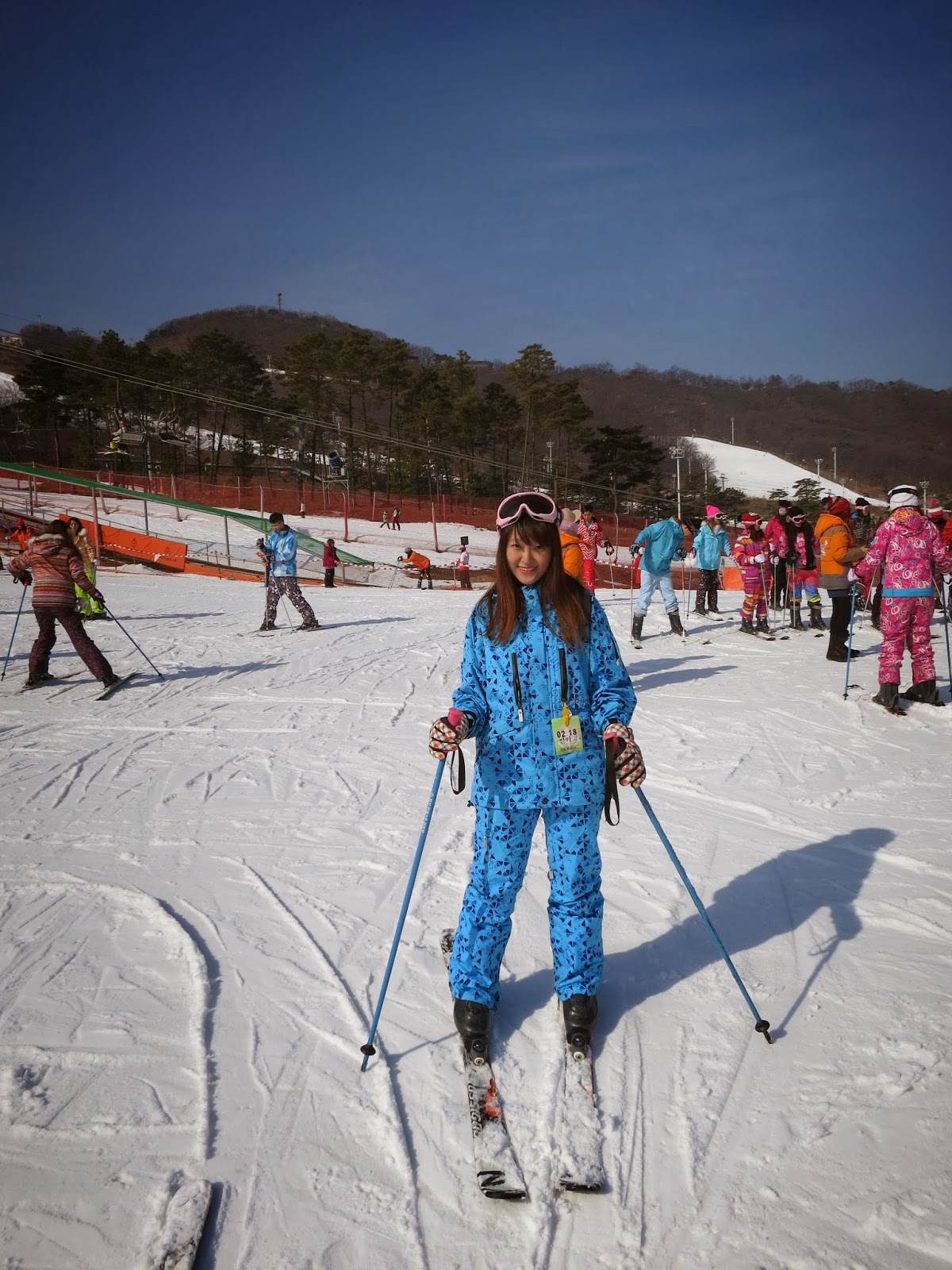 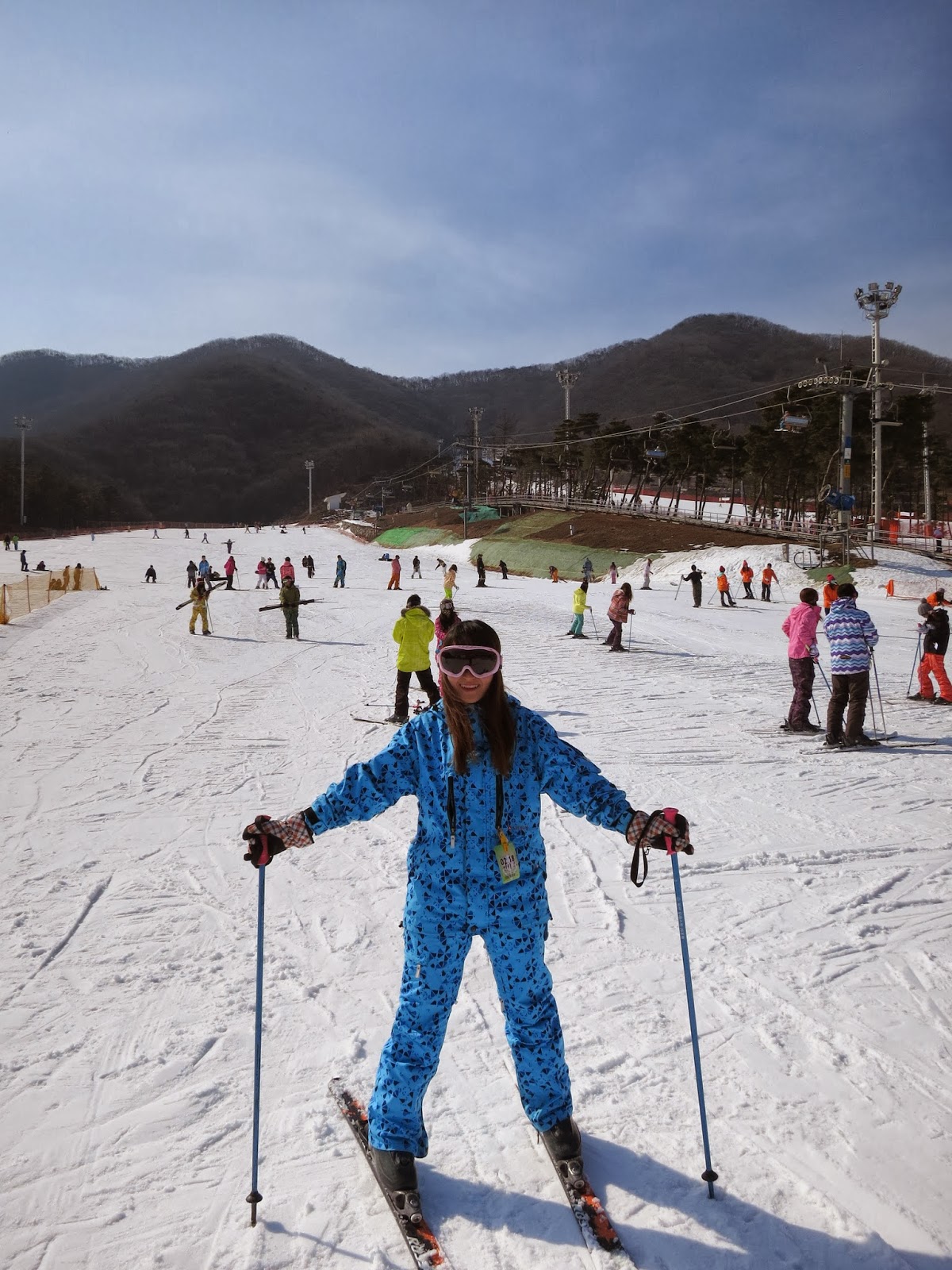 Skiing wasn't easy at all!! Oh my gosh... Sliding down from a slope was so fast and it's not easy to stop for beginners! My instructor kept saying 'A A A' to me. 'A' is a position to slow down or stop completely on a slope. Nevertheless, it was damn fun!!! I think I'd be more daring if there's no one else in the ski resort. I was so afraid to crash into others! 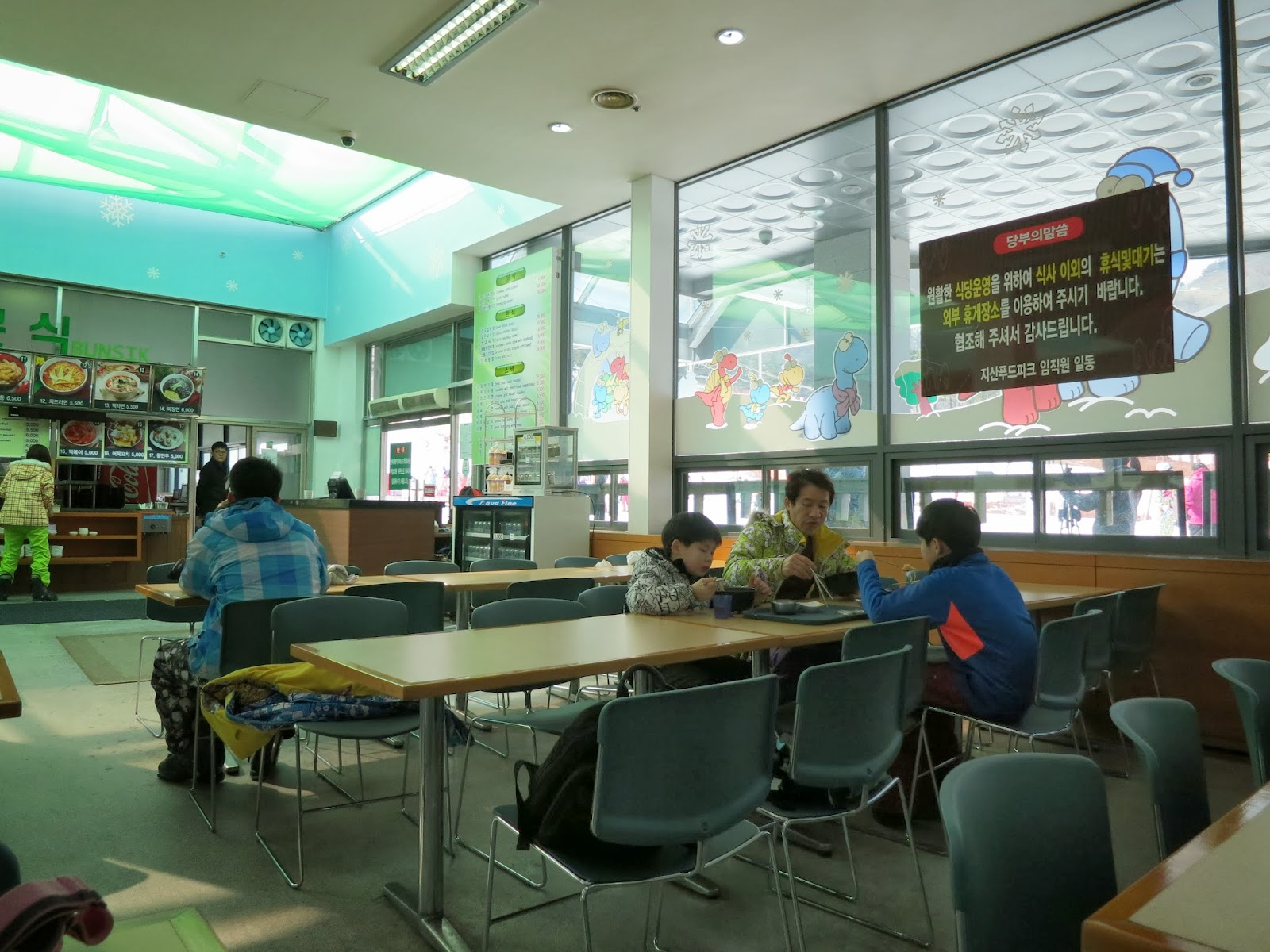 Our ski lift was only valid after 12pm. Even though the lunch wasn't that great, at least we were recharged and ready for the fun!


I injured both my knees in the middle of the slope! I was sliding down fast, with my instructor right in front of me. My ski gear got caught in between hers and I couldn't lift them up while I was sliding down! My legs spread wider and wider and finally came into a halt! My ankles were so painful as my foot was locked onto the board. Both of us were stucked in the middle of the hill and waited till my bf noticed us from down the slope, walked up towards us and pulled me up. The reason why he wasn't with us was that he couldn't stop himself from sliding and slid down all the way. LOL

I was being brought to the sick bay. The sick bay was SUPER FAR AWAY! Had a hard time walking towards it. =( Thankfully, the cream that the nurse applied on me worked very well! My knee wasn't that pain after resting for about half an hour. While waiting for my legs to recover, we had a chat with our tour guide. She mentioned that if I wanna shop for clothes, I should go to Ewha Womans University area as their things are much cheaper compared to popular shopping areas like Dongdaemun and Myeongdong.

As my knees were still hurting slightly, I stayed on the ground to learn skating on ice from my instructor with while BF took the ski lift up the play with the slope. We had to leave the resort at 3pm as we had another itinerary on our tour, which was to visit the Ginseng Center at Namsan.

We bought 2 bottles of 100g Ginseng each. They packaged 3 bottles into one box but we asked if we can buy 2 each, so they just added another bottle for us. Initially there's only 1 free Ginseng Facial Foam but I asked nicely if they can actually give us 1 more as we are both buying for our own parents. The sales woman was generous and mentioned "since you two are so filial, I'll give you one more". Koreans are very nice. =)

Beef lovers out there! If you are looking for delicious and cheap beef, you got to go to the following Korean BBQ restaurant that I'm going to HIGHLY RECOMMEND below! All thanks to XiangYu, my Sec school & Uni school mate, who has been to Korea for an exchange program. She strongly recommended me to this place.

San Juk BBQ at Anam Station
Direction: Anam Station Exit 3, make a u-turn from the exit and turn left into the street. Walk straight down until you see a street between Isaac Toast and Ediya Coffee. Turn left, you will see a roundabout and the bbq shop will be on the right.


We were so glad that it was opened in the evening!! We tried going there yesterday (Korea Day 4) but it was closed in the afternoon. We ordered the first item in the menu - Beef Slices for 3 people, 600g. Even though it's for 3 people, we could finished it ourselves. I think I can even finish it alone cause I love beef so much!! <3 The beef was well marinated and I didn't realize that I never take a single picture of the cooked beef!! =x Too yummy already! On top of that, one of the Korean staff was pretty cute too! All of them were males anyway. 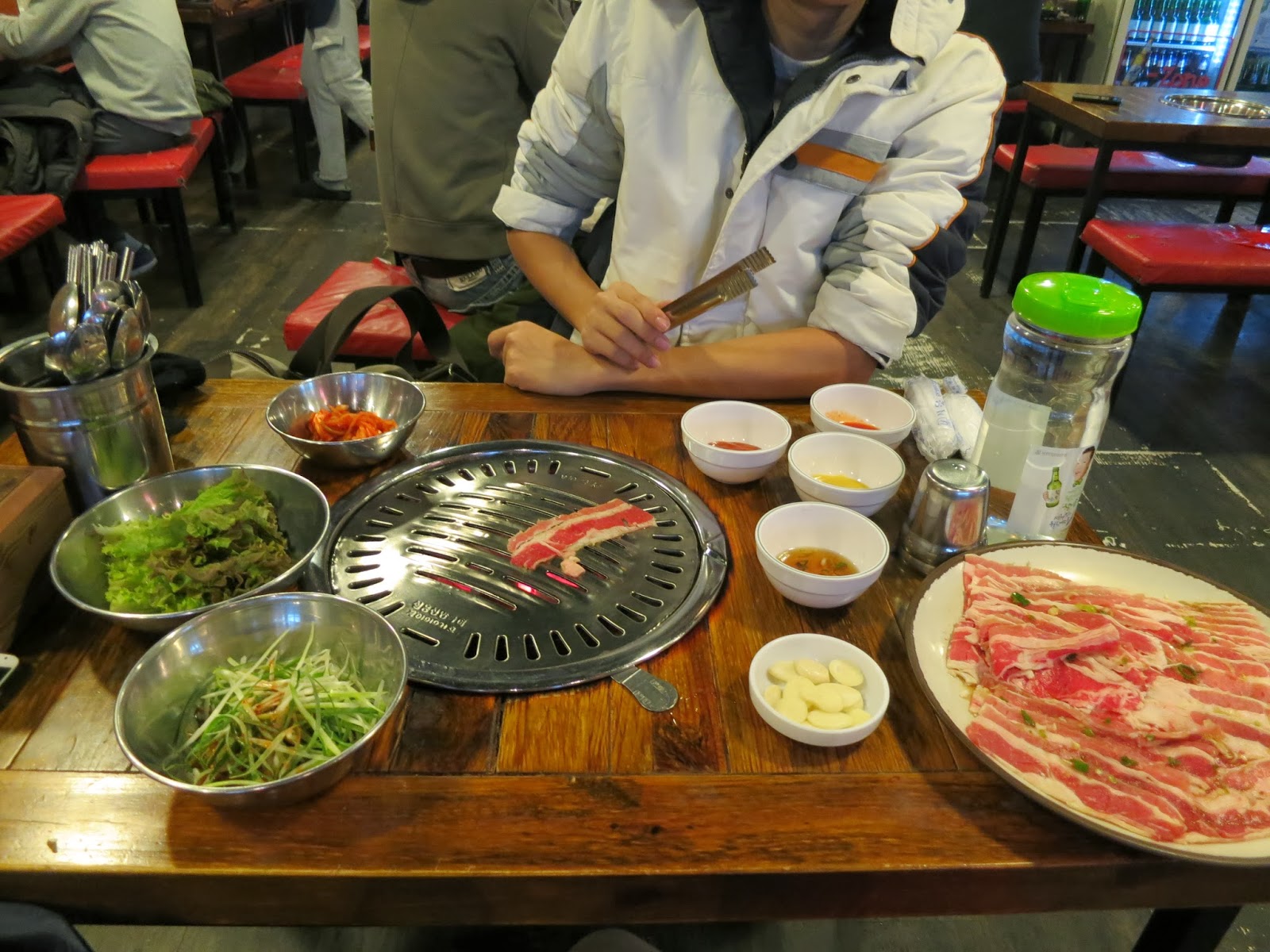 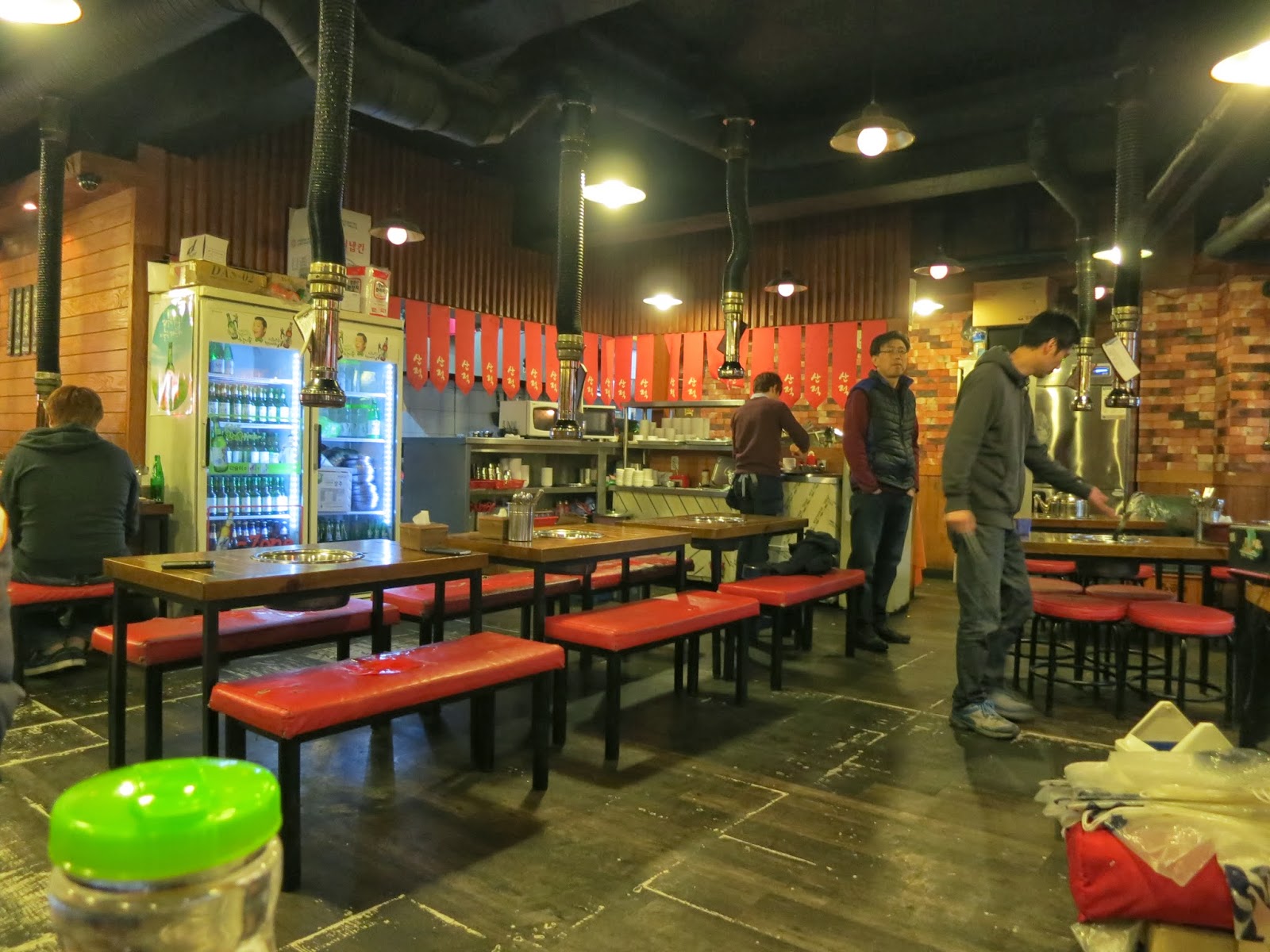 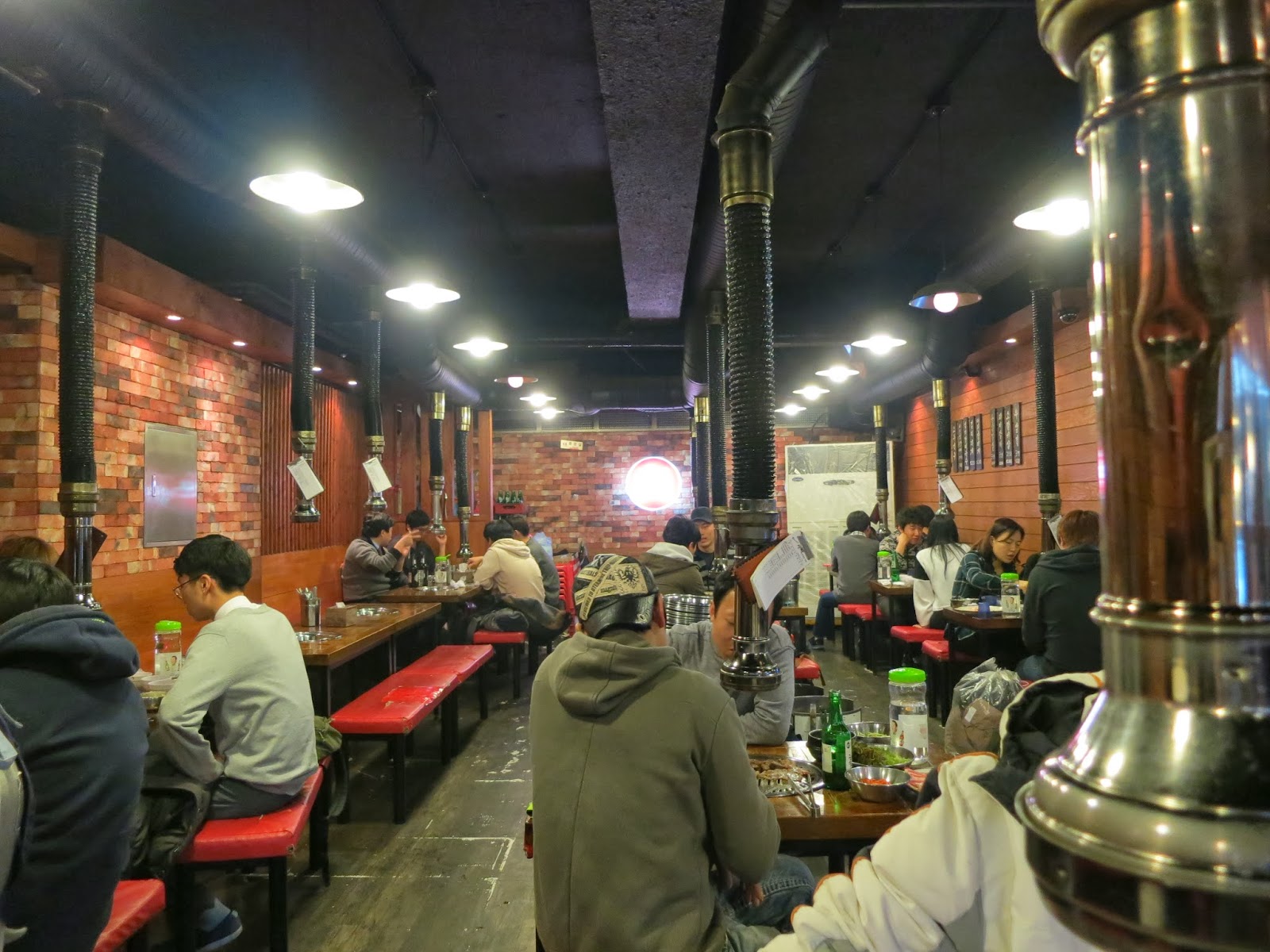 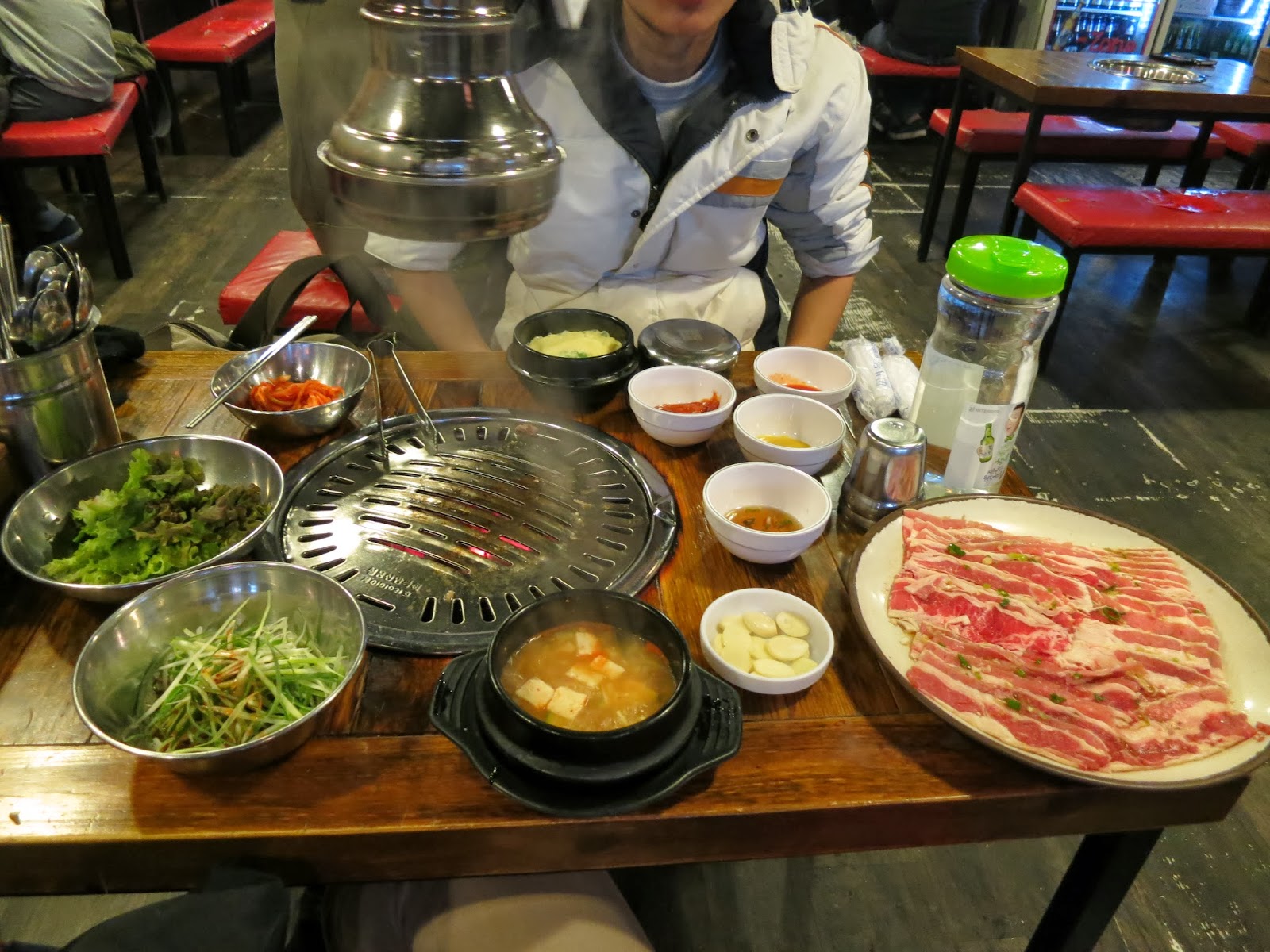 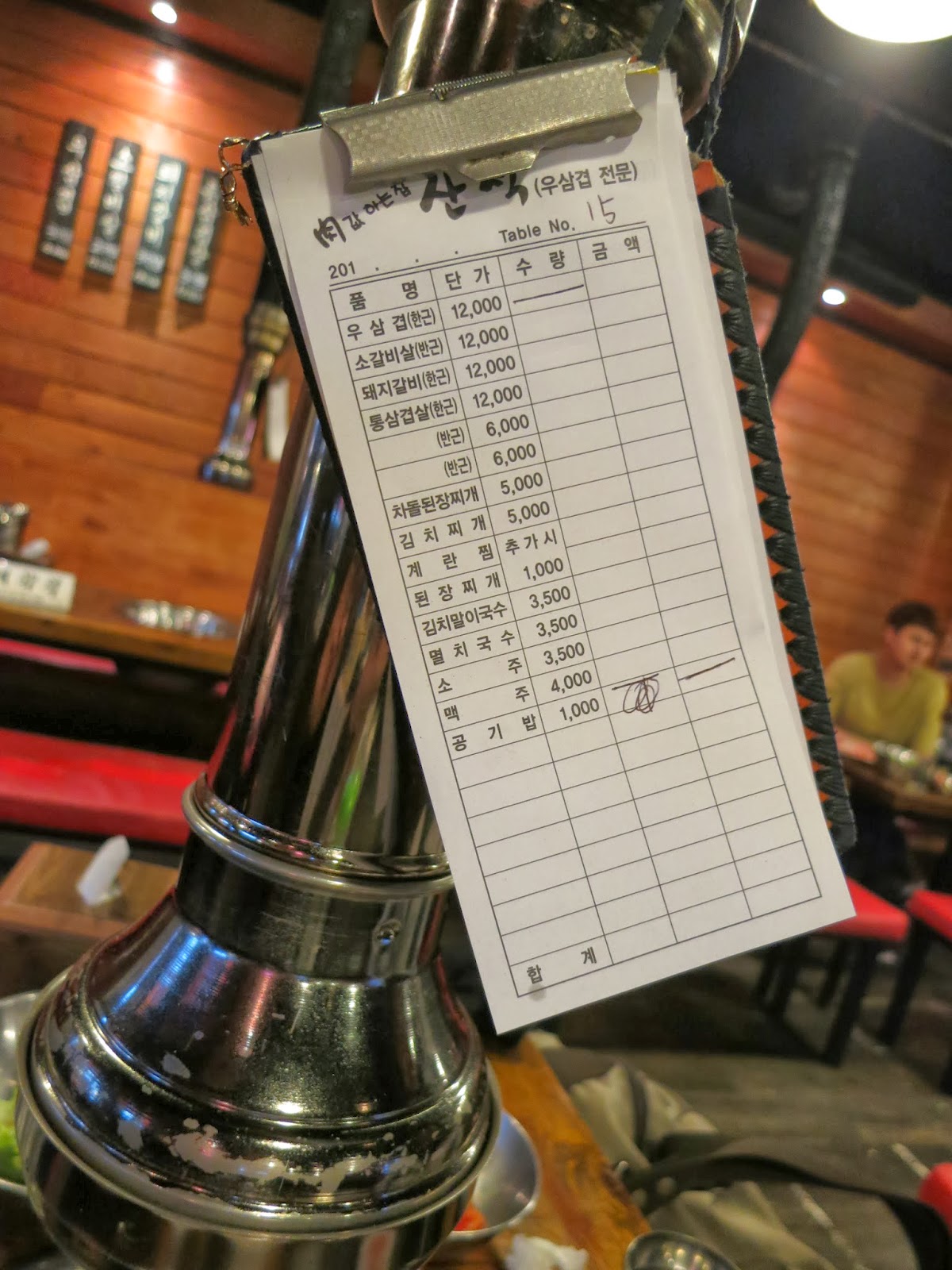 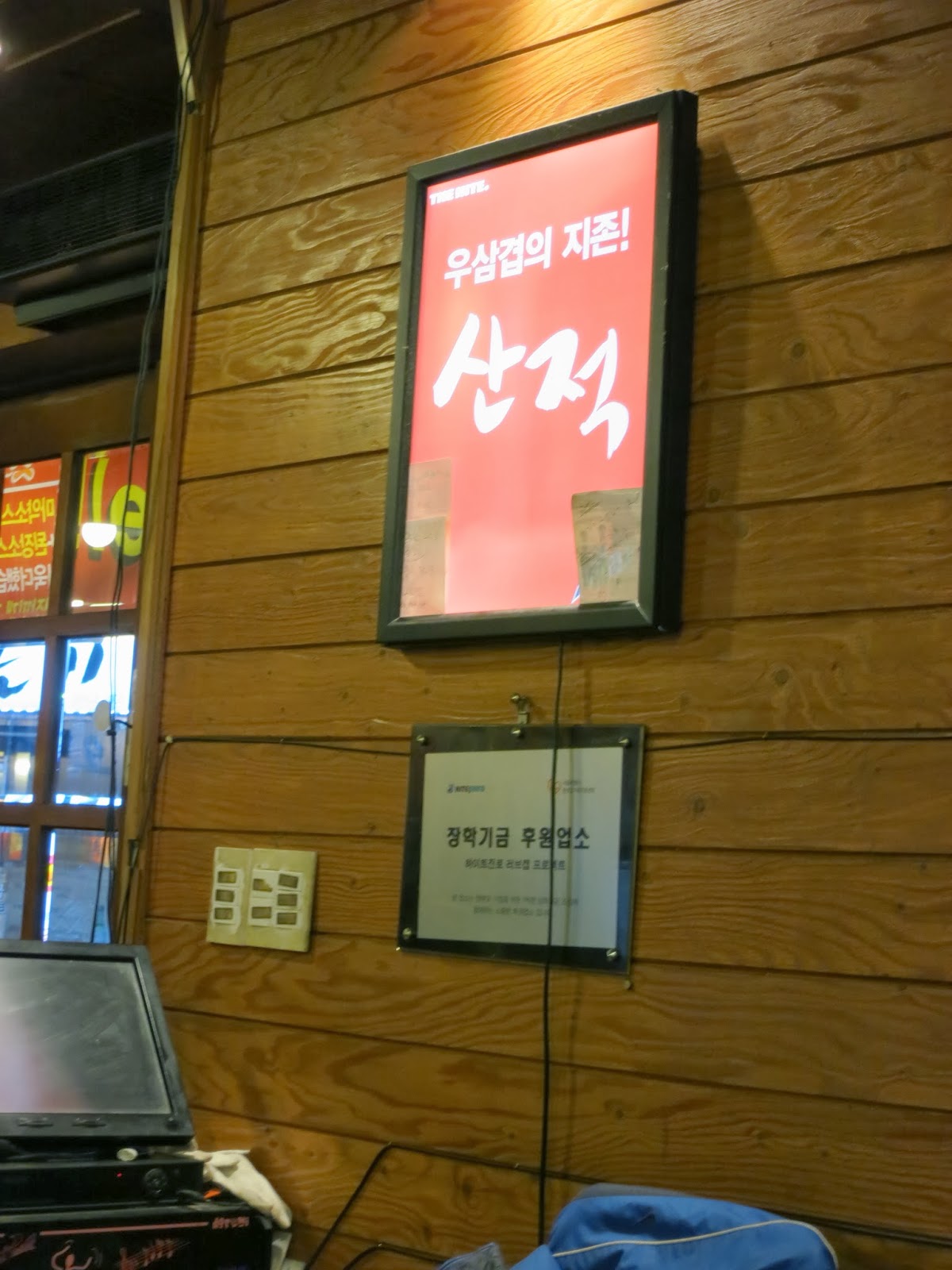 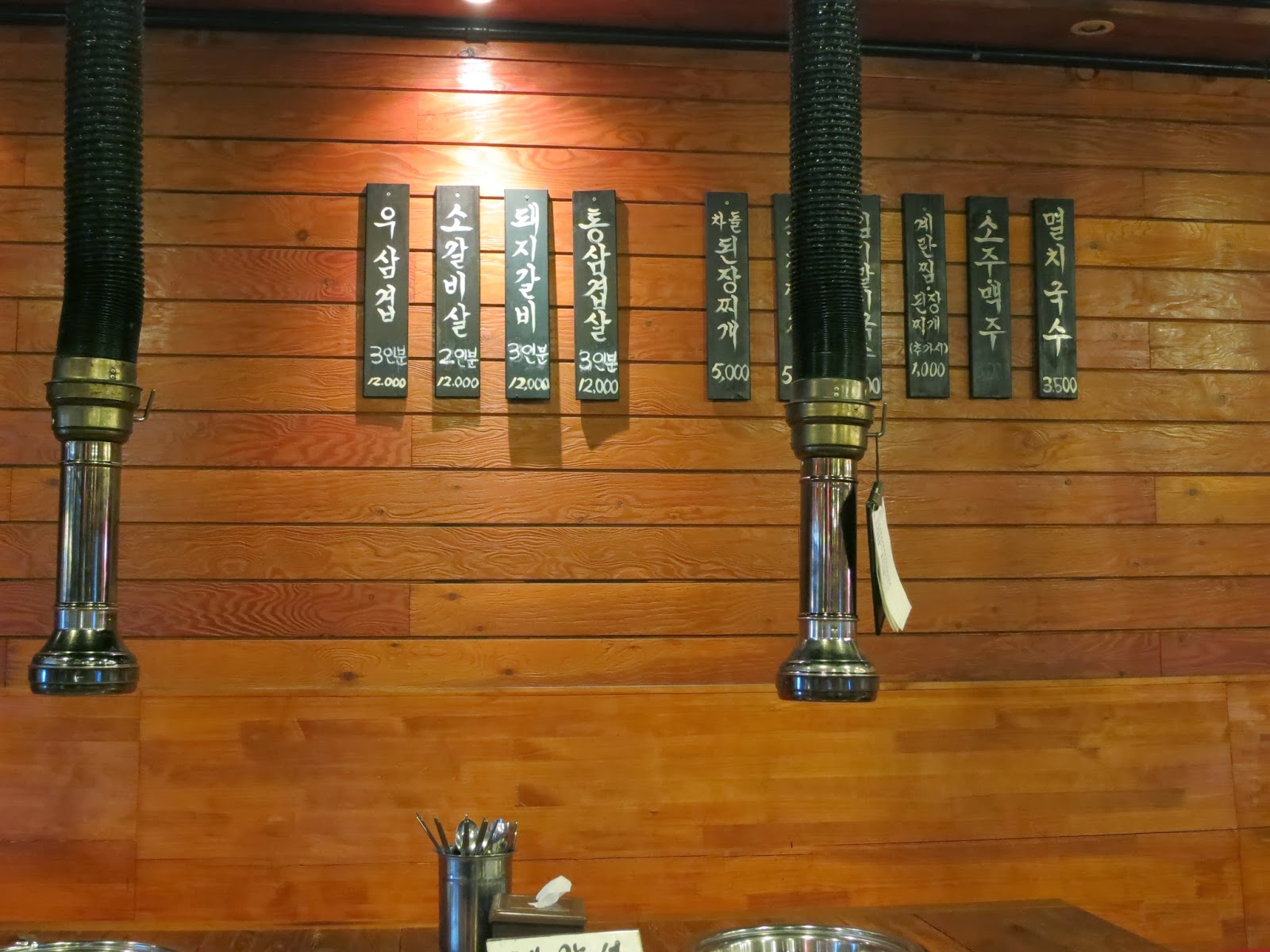 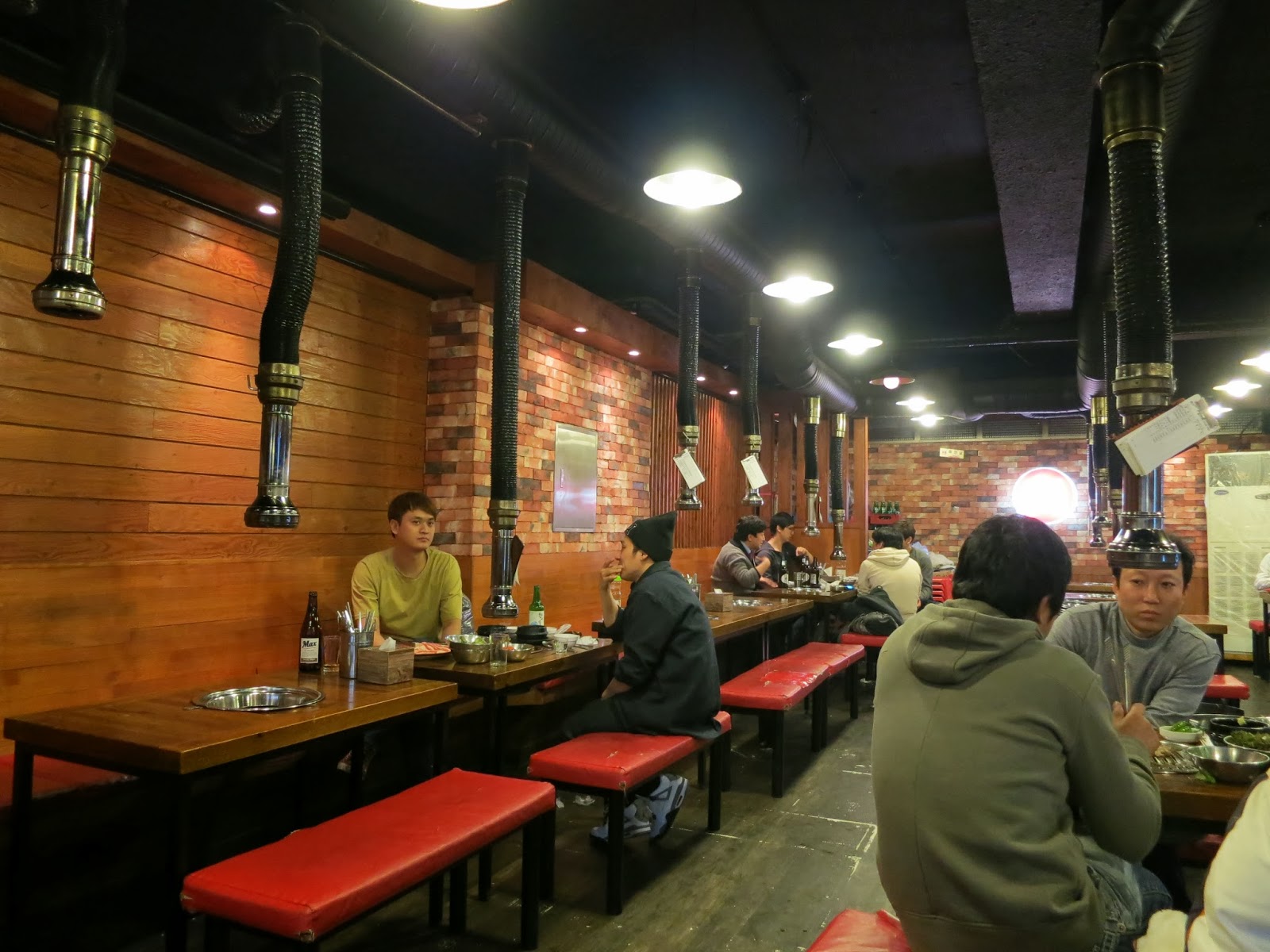 The meal only cost us 13,000 won (Slice beef and 1 bowl of rice), about SGD 15.50 for 2 of us!! Given the amount of beef we got, this was really cheap and AWESOME!! It's like the best fulfilling Korean BBQ meal we had in our trip! We will definitely come back to this BBQ restaurant again when we visit Korea in the future.

There were many teenagers/youths in Anam area as mentioned on Korea Day 4, Anam is situated near Korea University (KU). One of their famous cosmetics brand Innisfree (Natural Benefit from Jeju) has an outlet in Anam. They were having crazy sale! BF and I squeezed in with all the Korean girls and bought some products that look promising good. As we couldn't read Korean words, the sale was actually for Innisfree members!! However, the woman at the cashier was really so kind that she offered us the sale prices too! Thank you!! One mask was like 470 won (60 cents SGD)!! I wonder if they are good. Hahaha.

We are going to Everland on Korea Day 6!! Also, we gonna shift to an atas hotel in Myeongdong tomorrow morning! =)
Posted by Lynne Chua at 4:24 AM